Empty pesticide containers, piles of trash, and thousands of feet of black poly-line—these describe a recently eradicated trespass grow in the nearby Shasta-Trinity National Forest. In September of this year, the Cannabis Removal on Public Lands Project (CROP) organized a visit to this site where various media outlets, including National Public Radio and The Atlantic Magazine, came to learn about trespass grows firsthand.

Led by the Forest Service and the Blue Lake based Integral Ecology Research Center (IERC), CROP and its guests traversed down a steep hillside off a Forest Service road and made their way into the first of the grow site’s six plots. The first plot had a sleeping and food processing area and a cleared planting area with a couple hundred planting holes that each contained a handful of plants. The next plot contained a makeshift shelter, and a large planting area. Further down the ravine, they arrived at the largest plot—a large terraced area, with trees cut out of the way to let in more sun, and numerous lines of black poly-tubing meandering through the site. Collectively, these trespass grow sites divert an estimated nine billion gallons of water annually—the yearly water budget for Redding. Some of the lines at this grow were still operational, never removed from their source streams. While a typical site, the infrastructure and organization of the site was robust for such rugged terrain.

There are thousands of trespass grows like this throughout nearly all of California’s National Forests. While most trespass grows are in National Forests, other public lands including National Parks, BLM lands, and State Parks also contain trespass grows. While recreation in National Forests has increased over the past decade, budget cuts have reduced Forest Service presence in the forests and the ability to properly patrol them. For example, the Shasta-Trinity National Forest is 2.2 million acres, and yet only six Forest Service Law Enforcement officers patrol its entirety. Reclamation of the sites is only one aspect of removing them from our public lands. To avoid playing trespass grow whack-a-mole, it’s critical that there is regular USFS law enforcement presence to deter the activation of new sites, while reclamation teams clean-up the backlog of existing sites.

Many dangerous pesticides found at trespass grows are EPA-banned, such as carbofuran—a liter was found at this site—and sarin-based malathion. Referring to carbofuran, “A quarter of a teaspoon can kill a 600-lb black bear. So, only a tiny amount will kill a human,” says Dr. Greta Wengert, co-director of IERC. “It remains in an ecosystem for a long period of time.”

While only restricted in California, second-generation anticoagulant rodenticides have arguably impacted more species than any other pesticide found at these sites. These rodenticides not only poison rodents, but also many non-target species of wildlife, including ESA-listed and candidate species such as the northern spotted owl and Pacific fishers. According to peer-reviewed research, over 80 percent of Pacific fishers now test positive for rodenticides. Dr. Mourad Gabriel, co-director of IERC states, “In fishers, there is an in-utero transfer, and a mother’s milk transfer as well,” regarding rodenticide poisoning of fishers. So, it’s not just bioaccumulating through the food web—it’s also multi-generational.

Before CROP, there was no bi-partisan effort or political will to remove trespass grows from the landscape. After two years of meetings and listening to communities and scientists, CROP is now spearheading a state and national effort to secure state and federal resources to reclaim trespass grows on National Forests, increase Forest Service law enforcement and overall presence in National Forests, and educate the public on the dangers of ingesting unregulated cannabis.

CROP is directed by an Advisory Board, which includes the Northcoast Environmental Center, other environmental organizations, state and federal agencies, local officials, tribes, scientists, and the legal cannabis industry. CROP is fighting on behalf of California’s wildlife, users of public lands, and downstream communities long plagued by trespass grows. To learn more about CROP, or how to contribute, please visit www.cropproject.org. 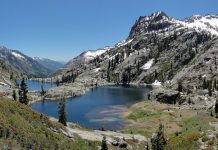