Have you ever found small pieces of 3/4 inch black plastic pipe while walking on the beach?

A group of friends and I began picking up trash we found on Clam Beach after last winter’s storms. When we heard about the NEC’s Adopt-A-Beach program, we adopted Clam Beach as the Clam Beach Combers.

At first, we just disposed of collected debris in the trash bins.  After joining the Adopt-A-Beach program, we started separating the items and filling out the program’s data collection sheet.  We found the expected plastic bottles, plastic bottle caps and lids, shotgun wads, fishing rope, tires, crab pots, plastic toys, shoes, cushions, trash bags, food wrappers, and other miscellaneous plastic junk.  We also regularly found quite a few 5 to 12 inch long pieces of 3/4 inch black plastic pipe.  Black plastic pipe isn’t listed on the data sheet as one of the most likely items to find on the beach, yet it was one of the most common items we were finding. We had no idea what the pipe was used for or where it was coming from, so we began to investigate.

Initial internet searches about debris found on other California beaches turned up no mention of pieces of black plastic pipe. I finally came across a December 6, 2014 Press Democrat article with a photo of a man with 1000’s of short pieces of black plastic pipe that he had picked up over the previous six years on the beaches of Point Reyes National Seashore. The article stated that his research connected them with oyster farming in Drakes Bay.

After seeing the photograph, we realized that in addition to the black pipe, we had also been finding the short pieces of 1/4 inch polypropylene yellow rope. During some of our clean-ups it wasn’t unusual to find 20 or more pieces of black plastic pipe and 40 or more short pieces of yellow rope on a half mile or less section of Clam Beach. Once we knew what type of debris to look for, we also found some of the plastic zip-tie tags and an end cover to an oyster basket.

The recent environmental review documents for oyster aquaculture operations in Humboldt Bay discuss potential impacts associated with the abandonment or loss of oyster farming debris to the Bay and its shoreline. However, I couldn’t find any discussion in these documents of impacts from this plastic debris on the ocean or it’s beaches.

Clam Beach is about 16 miles north of the entrance to Humboldt Bay.  Is this type of debris also washing up on our beaches between Clam Beach and the mouth of the bay, or south of the entrance to Humboldt Bay?  The next time you are out walking on the beach, keep an eye out for these items—especially after winter storms. If found, please send photos and the location to casey@yournec.org. Documenting where these items are found is the first step toward working to minimize or stop this type of plastic debris from ending up in the ocean and on our beaches. 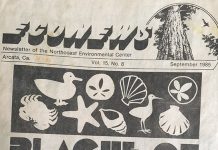 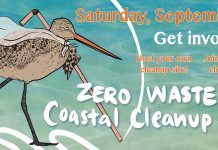