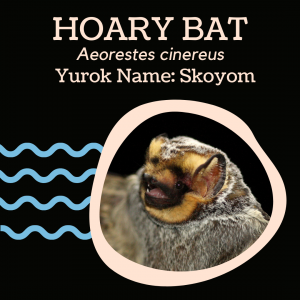 Hoary Bats are a widespread species in North America, and are one of the most common bat species in Humboldt County. They are also some of the largest bats, measuring nearly 6 inches in length.

They get the name “hoary” from their silver-tipped fur, which is reddish brown underneath. Hoary bats hunt their insect prey using very low frequency echolocation. This makes it harder for them to detect obstacles, so they typically hunt over wide open spaces. You can spot these tree-dwelling mammals at Humboldt Redwoods State Park in the evenings.

Image Description: The first slide shows a close up picture of a very cute hoary bat with its mouth open, bordered by a rough circle and squiggly blue lines. The second slide contains text, with a picture of the hoary bat in flight.