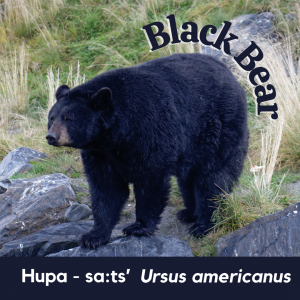 The American black bear (Ursus americanus), is well known to anyone who lives in close contact with forests and wildlands. Known as sa:ts’ in the Hupa language, these medium-sized bears are one of the most numerous species of bear on the planet. California alone is home to 25-35,000 individuals! Black bears mostly stick to forested areas with dense brush, but will venture into human settlements in search of food. While they share the continent with Grizzlies, the two species aren’t closely related. The American black bear’s closest relatives are the Asian black bear and sun bear. American black bears feature prominently in both Native American and settler cultures, and have inspired characters like Winnie the Pooh, the teddy bear, and Smokey the bear. Where have you seen black bears in Humboldt county?