Sea slugs are soft-bodied marine gastropods (mollusks). The word nudibranch refers to a specific type of sea slug, but is often misused as an umbrella term for all sea slugs. Sea slugs belong to the subclass Opisthobranchia, within which there are five orders, including: headshield slugs (Cephalaspida), sapsucking slugs (Scoglossa), sea hares (Anaspidea), sidegill slugs (Notaspidea) and nudibranchs (Nudibranchia).

Sight
Almost all sea slugs have some form of eyes, but they are much less developed than human eyes or even those of their molluscan relatives. Most often their eyes are merely a pigment spot imbedded deep within the tissue. It still remains uncertain how opisthobranchs view their environment. They appear to be sensitive to light but are unable to differentiate between colors.

Smell
If nudibranchs have the ability to smell, it comes from the horn-like structure located on their head. These structures are called rinophore which can be directly translated as “rino” for nose and “phore” for carrier. Many sea slugs have developed rinophores in an array of colors and shapes, though not all Opisthobranchia are equipped with rinophores. The more advanced rinophores are larger, allowing the species improved chemical detection. Rinophores not only help sea slugs navigate their environment but they play a crucial role in taxonomic and visual identification of species.

Interestingly, while sea slugs do not detect sound as humans do, they have otoliths which are the evolutionary precursor to human ear bones. In animals such as sea slugs, these bones probably function more for spatial orientation than for sound.

Taste
Though sea slugs do not have taste buds like those found in humans, they use their rinophors and oral tentacles to sense the chemical compounds put off by their favorite foods. When those chemical compounds are detected, their feeding reaction is triggered.

Touch
Most opisthobranches have some type of head tentacle that is believed to provide a sense of touch. Though it has not been determined conclusively, most sea slugs react to being touched so it is believed that these external appendages provide tactile sensitivity.

Respiration
Gills provide the function of extracting oxygen from seawater. Just like rinophores, gills provide a key role in the identification of species. There is a variety of forms gills can take in sea slugs. However, many species have gills located on the outside of their bodies. As a matter of fact, the term nudibranch is translated from the Latin word nudus (naked) and the Greek word branchiae (gill). Many sea slugs with external gills have the ability to retract the appendage when they feel threatened.

Similar to slugs on land, sea slugs crawl using a flat and flexible foot located under their body. As they move, they secrete a thick layer of mucus that helps them move along. Most sea slugs have also developed the ability to swim, though this skill is more often used to escape predators than as a primary form of locomotion.

Local Sea Slugs
A variety of sea slugs can be found while tidepooling locally. To see a sea slug in person, find a rocky shore and visit during a very low tide (remember to always be aware of the incoming tide and never turn your back to the ocean). Bakers Beach is one local spot where sea slugs can almost always be found during a low tide. If you look closely, they can often be found munching in the sea grasses or hiding in crevices.

The three nudibranchs featured on this page were photographed locally and are commonly found in our tide pools. While they appear large in the photos, they are actually quite small.

The opalescent nudibranch (Hermissenda crassicornis) can be found from the intertidal zone to a depth of 122 feet. They grow up to three inches long and feeds on hydroids and anemones. While dining on anemones, opalescent nudibranchs consume stinging cells called nematocysts. These are then transferred to their own frilly appendages (cerrata) and used as a defense mechanism.

Frosted nudibranchs (Dirona albolineata) feed on a wide variety of prey and have specialized teeth that are strong enough to crack open snail shells.

The third sea slug is called a Hopkin’s rose (Hopkinsia rosacea). They grow up to one inch long and feed on bryozoans (tiny invertebrates only a fraction of a millimeter in size). Their habitat range is from Oregon to Baja, California. 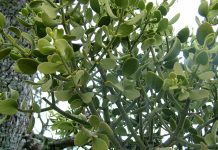 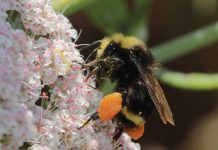