Since 2010, 18 billboards along Humboldt Bay have been removed through hard work and advocacy by Keep Eureka Beautiful, Sierra Club, Humboldt Bay Billboard Bye Bye, Humboldt Baykeeper, the City of Arcata, and many others. And on September 15, the Humboldt County Board of Supervisors moved in the direction to continue this trend.

At that meeting, the Supervisors voted 3-2 to approve a limited 5-year permit to rebuild a billboard that fell into the Elk River wetlands along Highway 101 last November – after which it must be removed. Supervisors Wilson and Madrone agreed with the Planning Commission, which denied the permit in May. However, Supervisors Bohn and Fennell supported approving a new permit that would grant the landowner a “vested right,” which doesn’t exist today. That’s because billboards are not allowed on lands designated by County zoning for natural resources or agriculture.

That left Supervisor Bass in the “miserable middle,” as she calls it. Bass pressed for a limited term for the billboard and called for a plan to remove billboards from coastal wetlands and scenic open space. After some heated negotiation, the board settled on 5 years, requiring removal at the end of the term. The landowner still needs Coastal Commission approval before rebuilding this sign.

The Campaign Against Billboard Blight

In 1965, the Highway Beautification Act limited billboards to commercial and industrial lands. Scenic America calls it the Billboard Protection and Proliferation Act, describing it as ”the only federal environmental regulation that requires taxpayers to pay the polluter to stop polluting.” Many counties and states eliminated billboards from open space decades ago. In Humboldt County, people have opposed billboard blight for decades, fighting over them one at a time.

In 2010, Baykeeper launched its campaign against billboards built in coastal wetlands along Humboldt Bay. Our goals were to clear the way for the Bay Trail and to restore scenic views along Highway 101 between Arcata and Eureka. Many of these billboards were on lands managed by the Humboldt Bay National Wildlife Refuge, North Coast Rail Authority, or the City of Arcata, but a myriad of barriers  prevented the removal of the billboards despite having no landowner permission. In fact, many had occupied public lands without paying rent for years. Other billboards were on private property, but violated highway safety laws, local zoning ordinances, and the Public Trust Doctrine.

Dating back to ancient Rome, the Public Trust Doctrine preserves the sea and seashore, rivers, lakes, and wetlands for the People. Public trust resources include fishing, hunting, navigation, preservation of lands in their natural state for open space, natural resource management, and scenic beauty. In California, the Public Trust Doctrine predates private property rights, and all local and state agencies have a responsibility to protect these resources below the high tide line or beneath navigable waters, even on private property. It is the law that declares that the coast belongs to all of us.

Legal research revealed a tangled web of regulations – most of which were not being enforced. The biggest obstacle to removing billboards turned out to be the failure of the CalTrans Outdoor Advertising Agency to enforce the California Outdoor Advertising Act (the ODA). Once the focus was on the ODA, we began to have real success (see A History of Humboldt Bay Area Billboards Removed Since 2012.) 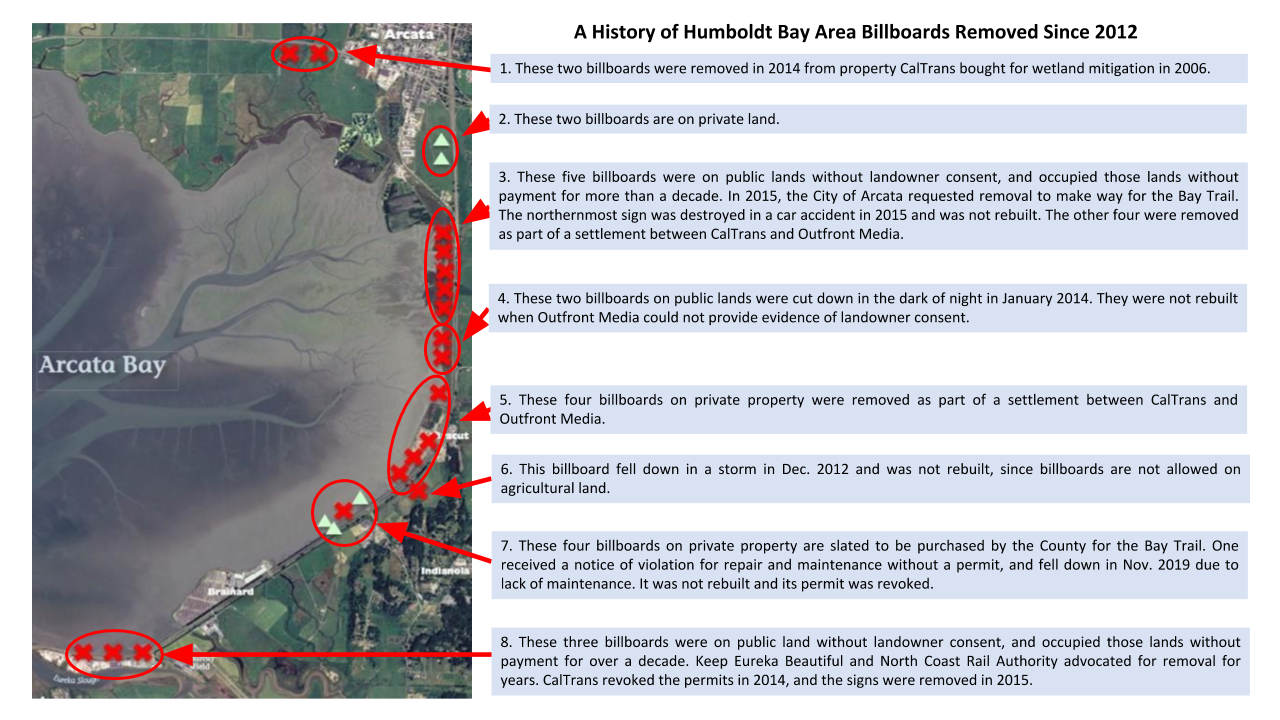 Victory at the Coastal Commission

In 2013, CalTrans applied for Coastal Commission approval of the 101 Safety Corridor Project, a plan to build an overpass at Indianola Cutoff, eliminating most left turns across traffic between Arcata and Eureka. At that time, the Humboldt Bay Trail was a 20-year old dream and more than 20 billboards blocked scenic views of the bay. In response to public testimony, the Coastal Commission approved the project with caveats: the Bay Trail must be built, and the billboards must be removed to mitigate the scenic impacts of the overpass on former bay wetlands. Local Caltrans staff finally took an interest in the Sacramento-based ODA’s lax enforcement of billboard regulations.

County residents have long demanded an end to billboard blight. The 1984 General Plan called for a study that would regulate billboards along scenic routes, but the study was never completed. The 2017 General Plan includes policies limiting billboards in coastal wetlands and scenic areas, but those policies have yet to be implemented.

At the September 15 meeting, Supervisor Virginia Bass argued for “a comprehensive plan” to remove “nonconforming” billboards like many counties did 40 years ago, rather than fighting over them one by one. There are various legal precedents that support such a plan. In 2006, the City of Arcata won a precedent-setting appeal by Viacom Outdoor affirming local governments’ power to regulate the rebuilding of billboards destroyed by natural forces. And these billboards have been maintained without permits for decades, meaning that their demise is inevitable as the posts rot and footings erode.

We look forward to seeing this long-overdue plan come to fruition, and will keep you informed of opportunities to express your views. To join our email list, send a message to alerts@humboldtbaykeeper.org.