The Humboldt marten, a small carnivore related to minks and otters found only in old-growth forest and dense coastal shrub in Northern California and Southern and Central Coast regions in Oregon, is one of EPIC’s focal species. The Humboldt marten’s population is so small that the species was thought to be extinct until researchers, acting on a rumor, rediscovered the species in 1996. Today, there are less than 100 Humboldt martens left in California. This number is so low that a single event—disease, poisoning, fire—could eradicate all Humboldt martens from California.

Here’s a rundown of the work EPIC has done in the past year to help protect our favorite mustelid.

In response to a lawsuit brought by the Environmental Protection Information Center and the Center for Biological Diversity in 2017, a federal judge overturned an April 2014 decision by the U.S. Fish and Wildlife Service denying endangered species protection to the Humboldt marten. EPIC sought to list the marten in 2010 after new research showed that the already low population was in decline—down 42% since the species was rediscovered—and was perilously close to extinction. As a result of the lawsuit, the Fish and Wildlife Service will have to revisit its decision by October 2018 on the fate of our furry friends. EPIC will be watching the agency’s decision closely.

EPIC and allies filed a petition with the California Fish and Game Commission to list the Humboldt marten as an endangered species in California back in June of 2015. As part of the listing process, the California Department of Fish and Wildlife (CDFW) is supposed to prepare a report on whether science indicates that the listing is warranted, a necessary step before the Fish and Game Commission can act. That report is over two years tardy. Why? Timber industry pressure.

CDFW is working with Green Diamond Resource Company on a potential Safe Harbor Agreement for the marten (voluntary conservation measures on its industrial timberlands). If approved, this Safe Harbor Agreement would remove the critical protections of the listing itself. EPIC has tried to obtain copies of documents from CDFW through the Public Records Act, but has been stonewalled to date. Rumor is that the Safe Harbor Agreement won’t even materially improve Green Diamond’s timber operations, allowing the company to continue to clearcut the lands most critical for marten protection, habitat connectivity, and species conservation.

CDFW denies all of this, of course, and says that the Fish and Game Commission should be ready to decide on the marten at its August meeting in Fortuna. EPIC knows better than to believe this.

EPIC and four sister conservation organizations filed a rule-making petition asking the Oregon Department of Fish and Wildlife to ban trapping of Humboldt martens in Oregon’s coastal forests. While the marten is under review for protection under the federal Endangered Species Act and the California Endangered Species Act, they can still be trapped for their fur in Oregon, even though fewer than 100 survive in the Siuslaw and Siskiyou National Forests.

The petition follows a new study that found that trapping could easily wipe out the species in the state. A newly published scientific study concluded that Humboldt martens are so rare in Oregon that trapping just two to three individuals could result in wiping out the population on the Central Coast. In addition to trapping, Humboldt martens are threatened by vehicle collisions on Highway 101 and ongoing logging of mature forest habitat.

Bring Back our Beavers! 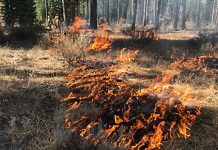