by Vimal Golding, Field Biologist with the Smith River Alliance

On October 19, 2021, testimony was accepted on the Smith River National Recreation Area Expansion Act (S.1538) in a hearing held by the U.S. Senate Energy & Natural Resources Committee.  The legislation would adjust the National Recreation Area (NRA) boundaries to add approximately 58,000 acres of the North Fork Smith watershed in Oregon to the Smith River NRA; protect all lands located inside the NRA by permanently withdrawing them from new mining claims, helping protect this sensitive area from proposed nickel strip mines; and designate 75.22 river miles of Wild and Scenic Rivers, including Baldface Creek, Chrome Creek and nearby streams.

In 1990, Smith River Alliance (SRA) and partners were instrumental in establishing the Smith River National Recreation Area, which protects the majority of the Smith River watershed in California. Unfortunately, these protections stop at the Oregon border, leaving the headwaters of the North Fork Smith exposed to mining proposals from foreign-owned groups like the Red Flat Nickel Corporation who submitted a plan to drill up to 59 test mine shafts on 3,980 acres in the Baldface Creek watershed, a major tributary of the North Fork Smith. 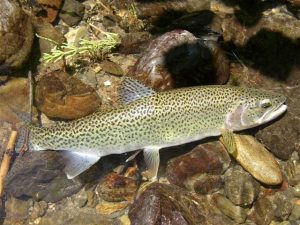 I know the area well having hiked and swam many of the North Fork tributaries.  A few summers ago, I was leading snorkel surveys to look for coho salmon in the Smith watershed. Every summer, crews fan out across the basin to survey select river reaches in search of this endangered fish. How many are there? Where do they hang out? Is the population stable, or is it shrinking? Using such simple tools as a mask and snorkel, and of course a rigorous scientific sampling protocol, we set out to answer these questions. Since I’m into that sort of thing, I was tasked with leading the more remote surveys that would inevitably require hiking, bushwhacking and camping out for one or more nights. Several of these reaches were in the headwaters of the North Fork Smith in Oregon. These included Baldface Creek and two reaches in the upper North Fork itself, and we found that they were positively loaded with coho. This finding wasn’t a surprise, as Baldface Creek is known to be the second largest producer of coho in the Smith after Mill Creek in Redwood National and State Parks, but it was still exhilarating to see these endangered animals out doing their thing so far away from human impact and interference.

Camping out in this wild place and watching the moon rise over the red-rocked serpentine ridgelines felt about as wild and remote as it gets. After all, to get there we had to drive for a couple hours on gravel roads then drop two thousand feet off a ridge on foot through the brush, and that’s counting the tiny hamlet of Hiouchi as the start. With all of this remoteness and lack of impact, one would expect these fish to have about as good a chance at survival as any, right? Well, yes and no.

Concerns about potential impacts from mining are real. The nearly 150 year-old Mining Law of 1872 still dictates where, when and how companies can mine on public lands, and these large scale mines tend to have a terrible track record when it comes to containing pollution. The now defunct Glenbrook Nickel Mine, near Riddle, Oregon and not far from the Smith, was determined to be the third largest toxic polluter in Oregon according to a 1997 report by the EPA. Furthermore, a 2012 review of currently operating copper mines in the US found that 100% of mines experienced at least one pipeline spill or other accidental release, and 92% failed to control contaminated seepage. These are some pretty bad stats.

But this isn’t going to be one of those sad conservation stories. Support for the mining ban/mineral withdrawal and the National Recreation Area Expansion is diverse and extensive — from County Commissioners, sport and commercial fishing interests, tribes, businesses, water providers, Chambers of Commerce, and of course  outdoor recreationists and environmentalists. The Smith River is recognized as one of the cleanest, most pristine river systems in the contiguous United States. It is the largest entirely free-flowing river in California and is widely regarded as a crown jewel in the National Wild and Scenic Rivers program and one of the key salmon strongholds on the west coast. With 410 miles of river already designated in the Wild and Scenic system, and the majority of the watershed protected as a National Recreation Area, visitors flock to the region for world class fishing, hiking, whitewater paddling and old growth redwoods. This has produced a robust and growing recreation-based economy, and boosted desirability as a livable community. And when people come to love a place, they will fight to protect it.