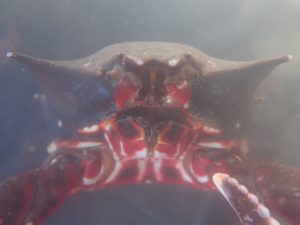 The Northern Kelp Crab (Pugettia producta) is commonly found in local tide pools during low tide. Their coloring primarily depends on the type of food they consume. They’re primarily nocturnal and their diet mostly consist of kelp. Their favorites include bull kelp, sea cabbage, and rockweed. If eating green kelp, they tend to be green. If eating red, they tend to be red and so on and so fourth. Because they take on the color of the surrounding kelp from their diet, they have a natural camouflage which helps to provide protection against predators.

Kelp crabs fall into the Family Epialdida, a group called masking crabs that like to attach algae and kelp to their shells to help with camouflage. Though kelp crabs mostly like to maintain a smooth shell for easier movement, they can occasionally be found attaching kelp and algae to their shells not as a mask but as a way to store food for later. Keep an eye out for these characters next time you’re in the tide pools!