On May 6, the Oregon Department of Environmental Quality (DEQ) delivered a potentially fatal blow to the Jordan Cove LNG project and the Pacific Connector fracked gas pipeline which has faced fierce opposition for more than a decade by a grassroots coalition of impacted landowners, anglers, small business owners, tribal members, health professionals, and many more Oregonians and Northern Californians.

Oregon DEQ denied the Clean Water Act Section 401 permit because the massive LNG export terminal and pipeline could not demonstrate that they would meet Oregon’s clean water standards. Jordan Cove LNG and the Pacific Connector Pipeline cannot be built without the state permit. With their denial, DEQ released 200 pages of detailed findings about how the project does not meet Oregon’s water quality standards.

DEQ notes that “DEQ does not have a reasonable assurance that the construction and authorization of the project will comply with applicable Oregon water quality standards.”

This decision follows a record-breaking public comment period that closed last August in which 42,000 people submitted comments raising concerns about the impact the Jordan Cove LNG project would have on fishing, recreation, public drinking water, and the economy of southern Oregon.

“Oregon’s decision shows that when we come together and speak out, we can win,” said Hannah Sohl, Director of Rogue Climate, one of the organizations involved in a broad coalition opposing the LNG project. “For years, a record number of Oregonians have urged [Oregon] to put the public interest over the special interests of Canadian fossil fuel corporation Pembina. It is great to see Oregon DEQ do just that.”

“We are pleased Oregon DEQ followed the law and the science.” said Andrew Hawley, staff attorney for the Western Environmental Law Center. “This decision shows that the Clean Water Act still works in Oregon to protect our citizens, our rivers, and our fish.” 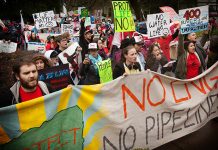