WHAT: Rally for the Preservation of the Mattole’s Ancient Forest and in Solidarity with Rainbow Ridge Forest Defenders

Make this the last year we have to fight to protect this awesome area!

Rally on Thursday to protect the Mattole river watershed from new logging roads, disastrous landslides, toxic hack-n-squirt herbicide deaths (timber company puts poison inside hardwoods so they die standing, and become exponentially more flammable), the cutting of old growth Douglas firs in un-entered forest, the sedimentation and heating up of the Mattole river, and the ravaging of critical and contiguous habitat.

Also, please Rally on Thursday in solidarity with direct action forest defenders. Humboldt/Mendocino Redwood Company now contracts with Lear Asset Management, a paramilitary style ‘security outfit. Last week, Lear goons went out to the Rainbow Ridge area of the Mattole to threaten with tazers, dogs, and physical force, unarmed, peaceful forest defenders many miles deep in the woods. They stole defenders’ survival gear; did dangerous things to the ropes holding defenders high in the air; employed sleep deprivation tactics with Mattole defenders over 100 feet above the ground; and, for hours, held down activists who were on the ground doing forest defender blockade support, until the Humboldt Sheriff’s Department showed up and took the activists to jail. Lear camo-clad goons failed to even ask the forest defenders who they encountered on the ground to leave the area; they simply pointed tazers at them and took them down.  This is unacceptable.

The company needs to know that the opposition to their logging plans is mighty. It won’t go away with arrests and violence against activists in the woods.

TRANSPORTATION TO THE RALLY

If you can offer a ride or need a ride, please be at one of these meet-up points to Carpool:

ARCATA (Departs: 8:45AM): Co-Op parking lot (on the edge facing the cider bar)

Ezra is coordinating the rideshares, making sure everyone who wants to go to the rally has a way there!

There are a couple of buses going south to Scotia on Thursday that get in around 9am and 12 noon.

FACEBOOK EVENT PAGE:  Rally at HRC for the #Mattole

Hope to see you at HRC’s Scotia Office on Thursday FOR THE MATTOLE! 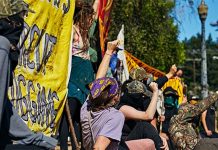