Consumer awareness about the problems caused by single-use plastic bags, straws, flatware, and cups has grown substantially over recent decades. More people remember to bring reusable bags and containers to the grocery store, and reusable mugs to the coffee shop. Thanks to legislation in California, more restaurants are skipping the straws. The dangers of plastics are well-documented and well-known to those tracking threats to our world, but one source of plastic pollution has gone largely unnoticed until now: shotgun wads.

So what is a shotgun “wad”? It’s the part of a shotgun shell that keeps the shot (pellets) together but separate from the powder. The wad also creates a seal that prevents gas from blowing through the shot allowing a more consistent discharge. Until the 1970s, shotgun wads were made of paper or cardboard. However, in order to lower manufacturing cost and increase ease of production, manufacturers switched to non-biodegradable plastic. For hunters, the plastic wad helps to create a tighter shot pattern enabling them to kill more birds (and injure less). Unfortunately, because the wad is discharged with the shot and travels quite a distance before separating, and are typically shot over water, hunters do not consider wads retrievable—which creates a huge plastic problem.

According to the Virginia Institute of Marine Science, billions of shotgun wads are produced domestically every year. Worldwide production has been estimated at 10 to 15 billion wads every year for the last 50 years. Each shotgun wad equals about two grocery shopping bags’ worth of plastic. Shotgun wads are particularly troubling because of where they’re used—in and around waterways, estuaries, and other places we’ve chosen to preserve for their natural qualities and ecological importance. Since so many wads wind up in waterways, they naturally drift into bays, rivers, and the ocean like tiny plastic squid.

So how do plastic wads affect wildlife? In the Taranaki Region of New Zealand, software created by MetOcean Solutions tracked shotgun wads from their source at a gun club on the Manganui River. The wads washed downstream 20 miles into the Tasman Sea and from there were found along beaches for about 15 miles in each direction. Locally, wads are commonly found from Redwood National Park to the South Spit of Humboldt Bay.

Unfortunately, wads often make it to the sea and can appear as a food source to pelagic birdlife (they even have the shape and color of a small squid). When a bird’s stomach fills with plastic, the bird feels full, ceases to eat and, confused, starves to death. This isn’t the only way single use plastic kills wildlife. According to a New York Times article, the stomach of a sperm whale washed ashore in Spain was filled with over 60 pounds of trash, mostly plastic.

In short, from single-use straws to shotgun wads, the plastic entering our marine ecosystems devastates wildlife—and even makes its way into the food chain. According to Newsweek, a study published in Environmental Pollution showed the average person may ingest anywhere between 13,731 and 68,415 microplastic particles every year, simply through eating.

The good news is that we live in a time of increased social consciousness regarding plastic. When it comes to plastic wads, while they are more effective than their predecessors, many hunting clubs in New Zealand and England have switched to biodegradable fiber wads for some uses. Here in the United States, a company in Virginia called GreenOps Ammo has recently started manufacturing 12-gauge shotgun shells that use biodegradable wads. Their website claims that their biopolymers “completely biodegrade” on land or in water (no high-temperature composting conditions required) and are non-toxic.

GreenOps Ammo’s CEO, Jason McDevitt, feels their wad is at least equally effective, and the production costs are only modestly more than standard  As there is no regulation of this pollution type other than requesting hunters to pick up wads, which clearly isn’t working, biodegradable options may be a good choice.  Initial discussions are underway on the possibility of beginning a local pilot project using biodegradable wads here in Humboldt County. We will keep you updated if this idea becomes reality.

Stanching the flow of single-use plastics into our oceans, rivers, and estuaries remains one of the critical environmental challenges of our times. Shotgun wads litter our natural areas and cause harm or even death in seabirds, sea turtles, and other marine life. If the hunting industry fails to take responsibility and shift toward biodegradable wads, better regulation may be the best path forward.

Are you concerned about shotgun wad litter on local beaches?

The San Francisco Chapter of the Surfrider Foundation is tracking this specific type of litter. You can upload your photos with location information to Wad Watcher at
https://sf.surfrider.org/shotgun-wad-watcher/.

Martin Swett has picked up more than 5000 shotgun wads and shells in the equivalent of one hunting season. 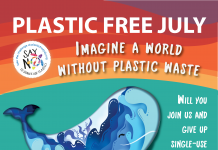