Home EcoNews When Rodents Are a Problem, Raptors Are The Solution

Raptors Are The Solution (RATS) is a non-profit organization working with a coalition of NGOs, agencies, scientists, municipalities, and individuals to work toward eliminating toxic rodenticides from the food web. Through its Owl Wise Leader Program, RATS incentivizes businesses, municipalities, and communities to stop using poison and switch to non-toxic methods of rodent control. Two Berkeley residents, Lisa Owens-Viani and Allen Fish, founded RATS in 2011 in response to hawks dying in Lisa’s neighborhood. Lisa suspected rodenticides were to blame, which was later confirmed in necropsies of the birds. 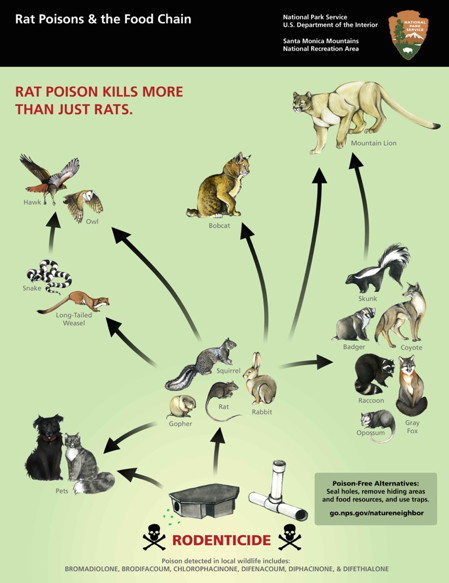 ARs have both direct and cumulative effects on non-target species of wildlife, pets, and children. Direct effects occur when an animal consumes the bait. Scavenging animals often eat the bait directly. Cumulative effects occur when an animal consumes a poisoned rodent and is “secondarily” poisoned. After ingesting rat poisons, rodents become sick and disoriented, making them easy prey for hawks, owls, mountain lions, bobcats, coyotes, and foxes, all of which depend on rodents for food. Scavengers like skunks, raccoons and opossums as well as pet dogs and cats are also at risk for secondary poisoning should they consume a poisoned rodent or an animal that has ingested a poisoned rodent.

In 2018, RATS filed a lawsuit against the California Department of Pesticide Regulation (CDPR), a division of the California Environmental Protection Agency, which would require CDPR to re-evaluate second and first-generation ARs due to their effects on non-target species. RATS wants CDPR to fully analyze direct and cumulative effects on non-target species under the California Environmental Quality Act (CEQA) as well as to analyze substantial new science about these impacts, also required under CEQA. CDPR has agreed to re-evaluate second-generation ARs but is resisting re-evaluating first-generation. Both first and second generation ARs are frequently detected in mammalian rodent predators throughout the state (96% of mountain lions, 90% of bobcats, and 86% of coyotes in the Santa Monica Mountains). These toxicants can weaken their immune systems, making them more susceptible to disease, and also affect their behavior and survivability.

RATS and its regional chapters encourage people to be proactive in reducing rat problems without the use of poison. Try raising chicken coops one and a half feet above the ground, use a spinning composter, do not leave pet food or bird seed outside, cover potential entry points (mice can squeeze through holes the size of a dime), trim trees so rodents can’t jump onto roofs, and cover exposed pipes/ducts on roofs. To deter rodents from damaging crops (when they seek water from the plants), try placing a pan of water in the area. Nest boxes and raptor perches can be installed to encourage raptors to help control rodents. If you have an established rodent issue, there are alternative methods to poison such as electrocution traps and snap traps. These products should only be placed where they cannot be accessed by wildlife, pets, or children.

Humboldt Raptors Are The Solution (HUM-RATS) was hatched in 2019 by Jaime Carlino, a Humboldt State University student studying wildlife. Jaime recognizes the importance of poison-free ecosystems to the diverse array of wildlife species that occur in Humboldt County throughout the year. HUM-RATS’ mission is to educate Humboldt County residents about the harmful effects of widespread use of toxic rodenticides and the ecological role of rodent-consuming wildlife species such as raptors.

HUM-RATS has been working diligently on its goal of assisting cities, local businesses, farmers, and community members in transitioning away from rodenticides. Prior to shelter in place orders, this involved visiting local stores thought to sell rodenticides and collecting data on which products they carried. We also collect data on locations of commercial bait stations. HUM-RATS contacts these places in hopes of working with them to limit the use/sale of rodenticides. As part of this effort, HUM-RATS elicited help from the community to report when and where people see bait boxes. A member of the community informed them of 14+ bait boxes containing a harmful second-generation AR surrounding the perimeter of a city building meters away from Humboldt Bay in Eureka. After informing the city about the toxic effects of second-generation ARs and their close proximity to Humboldt Bay, the City of Eureka announced they would be removing the bait boxes from this building. The city also stated they would look into effective alternative measures if their rodent issue recurred. HUM-RATS has offered to assist them to ensure no more poisons are placed on the landscape. HUM-RATS hopes it can use this positive experience with the City of Eureka in their effort to remove all remaining bait boxes surrounding city buildings and work towards the same goal with the City of Arcata. If you’d like to receive updates from HUM-RATS, search ‘Humboldt Raptors Are The Solution’ on Facebook or ‘humrats’ on Instagram.