As the world’s finite energy sources continue to be depleted—creating massive environmental damage and increasing the rate of climate change along the way—shifting to renewable energy sources is becoming more important than ever.

As they provide a powerful way to reduce greenhouse gas emissions and combat climate change, renewable energy sources are proving to be a necessary change in moving towards a more sustainable future.

A major energy source that presents a potential alternative to non-renewable energy in Humboldt County is wind energy, in which wind turbines convert the naturally-existing energy in wind to mechanical energy and ultimately to electrical power. This can then be used to power homes, businesses, etc. without burning fossil fuels and causing the inevitable environmental harm that comes along with that process.

Experts have noted that Humboldt County is a prime location for wind energy projects, with substantial energy potential relative to other regions. According to sustainable energy experts at the Arcata-based Schatz Energy Research Center, “Our local area is blessed with abundant renewable energy resources. By using our wind resource, Humboldt County can serve as a role model for other regions attempting to reduce their reliance on fossil fuels.”

A few years back, Shell Wind proposed a wind energy farm to be built at Bear River Ridge near Ferndale—though this project was withdrawn in 2012 due to local opposition and declining natural gas prices.

A new onshore wind energy project is now in the works, proposed by San Diego-based company Humboldt Wind LLC. The project would consist of up to sixty wind turbines installed in an area near Monument Ridge, southwest of Scotia. This proposed wind energy farm is estimated to produce enough energy to power roughly 33,000 homes.

After the failure of the Shell project, Humboldt Wind LLC seems to be making more of an effort to connect with local residents, holding meetings to gather input and working to reduce the negative impacts that a large wind energy project may have on the community. Some key differences between this and previous projects appear to be that most of this wind energy farm would be constructed on land owned by a single entity, making it easier to acquire the property, and the fact that Humboldt Wind LLC has been making significant efforts early on to gather input and information from the local community before they proceed with this project.

This onshore wind energy project is still in its early stages, and would need approval from the Humboldt County Board of Supervisors before it is able to move forward.

A second wind energy project in Humboldt County has also been proposed by local energy provider Redwood Coast Energy Authority (RCEA), who has partnered with what they call a “highly capable consortium” of other private businesses with experience in wind energy projects.

This project proposes a floating offshore wind farm located more than 20 miles off the coast of Eureka, which would consist of approximately 10-15 floating wind turbines.

Because of its offshore location, this project must first be approved by the Bureau of Ocean Energy Management (BOEM), a government agency responsible for regulating federal waters. RCEA is working towards submitting a lease bid with BOEM, which, upon approval, would allow the company to begin conducting studies at the proposed site and start solidifying plans for the project.

[Editor’s update 10/1/18: On September 12, RCEA announced it has submitted a lease application to BOEM to explore offshore wind in Humboldt County. Upon approval, it would allow the company to begin conducting studies at the proposed site and start solidifying plans for the project. For more information, visit: https://redwoodenergy.org/offshore-wind-energy/.]

In addition to the offshore wind energy project being proposed by RCEA, BOEM is also independently working to identify lease areas for solicited bids in waters off the coast of Mendocino, Humboldt, and Del Norte counties for other renewable energy projects. These leases would be awarded by the agency competitively—and unlike the RCEA project, BOEM is looking to site massive commercial-scale projects that would produce far more energy than we could use locally. A project of this magnitude would require significant upgrades to the transmission lines to the main power grid, and would call for the consideration of a broad scope of scientific data and input from stakeholders.

According to the agency’s website, “BOEM is currently working with the State of California on planning for potential leasing for offshore wind in federal waters off California.” As of now, BOEM is in the process of holding stakeholder meetings to gather data and information that will help inform their decisions about future offshore wind energy projects along the California coast.

Like the onshore project proposed by Humboldt Wind LLC, any offshore projects would also need to be thoroughly studied for potential environmental impacts before they are undertaken. These studies will be particularly important, as there is relatively little existing data on the impacts of floating wind turbines on wildlife populations so far offshore.

Each of these potential wind energy projects are very different logistically, but all share the common goal of moving towards renewable, sustainable energy sources and shifting away from fossil fuels.

While we’ll have to wait and see whether these projects are able to gain the public support and meet the legal requirements necessary to move forward, it seems clear that a shift towards renewable wind energy is in Humboldt County’s future.

How Does Our Electric Grid Actually Work? 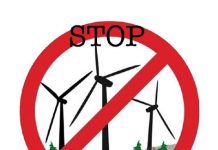